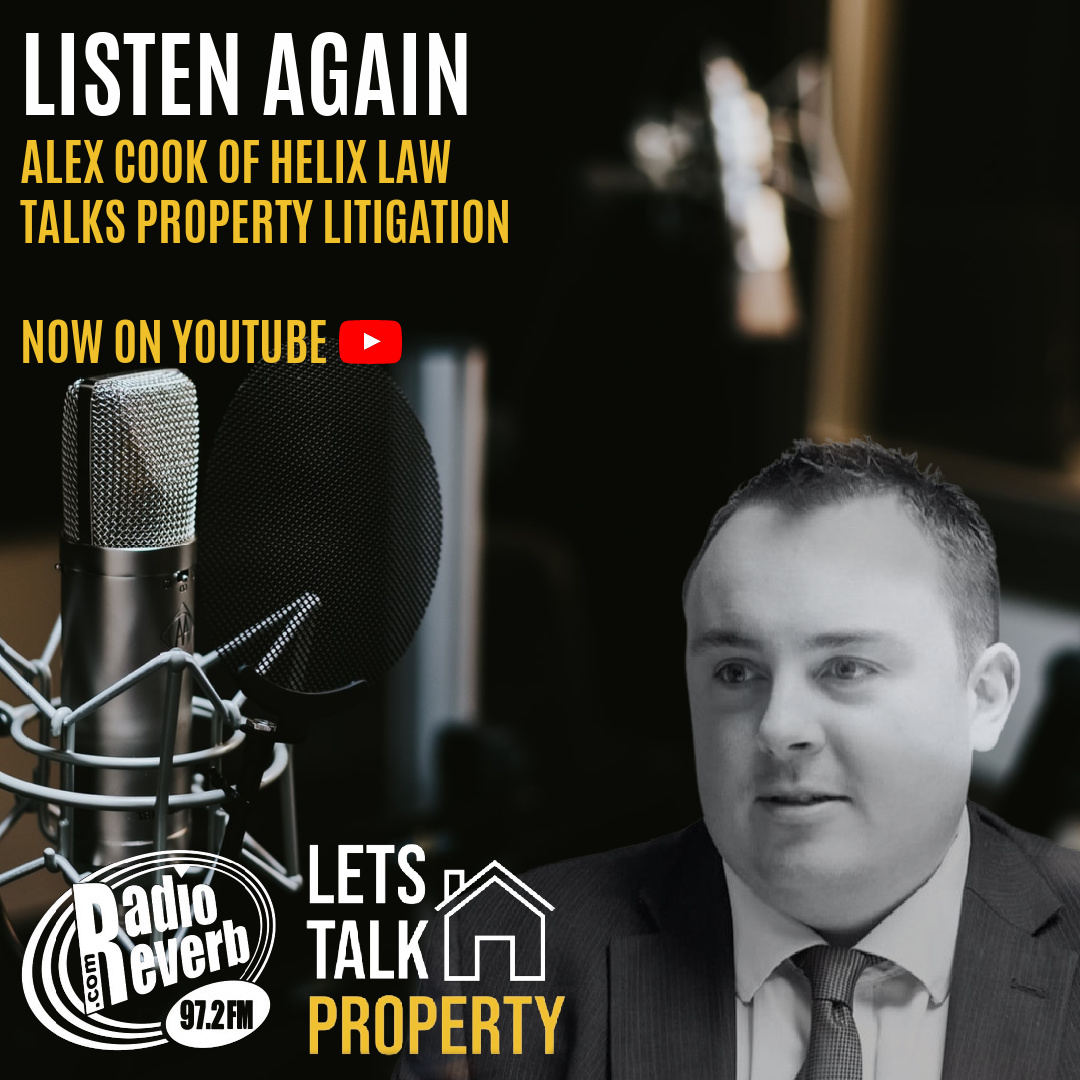 In my last blog I wrote about my radio show guest, Alex Cook, telling me how to try to avoid litigation in property disputes. This follow-up focuses on his tips for making the process straightforward when all other methods have failed.

Many problems, from a buying or selling transaction, a build, or a landlord/tenant dispute may end up in legal action being taken. It should be the last resort.

What advice would Alex give before actually going into litigation?

As an experienced solicitor in the specialised area of property law, Alex knows all about dealing with clients and how they can make the most of their mutual relationship.

“It’s a balance, a relationship of trust and confidence,” he explains. “It’s on me partly to reassure you.  But, at the same time, you need to let me do my job, that’s the flip side.”

“An hourly rate can be expensive, so the question is how many hours is it going to take?” Alex continues.

“Not all solicitors are the same. I think it’s something that people might not necessarily be aware of,” he adds. “So try and look for specialists, and be clear on costs and funding, because that’s incredibly important.”

I ask my colleague James what he learned from Alex in the previous blog?

“There was so much covered already,” he replies. “I particularly like Alex’s ‘digital bag’ analogy (see last blog), that’s a new one on me, I’ve written that one down!”

“I think people definitely know their rights a lot more now.  They’ve got a lot more resources to have a touch point to,” James adds. “But unfortunately, sometimes it’s not always accurate.  Within our sector we have lots of different legislation, which also often have transitional periods.  We might have two different pieces of legislation almost running alongside each other.”

As a specialist himself, in the letting side of estate agency, James has seen first-hand the recent impacts of the Covid era.

“I have to say, during Covid we’ve got absolutely loads of brilliant examples where landlords and tenants have really come together to try and find the best way through for both their circumstances,” he says.

“I think there have been some really good examples in the industry too. It’s a shame that there’s still a lot of negativity around how bad landlords can be! Because actually they are providing an absolutely vital service within our society where the government and the social sector are failing.”

“Alex spoke about mediation, I think there’s a lot more movement towards people mediating a lot earlier on so that things don’t have to go to fully fledged litigation.”

“Ultimately there’s a trade-off between the cost involved versus what is going to be the end result for all parties,” James concludes.

“So much of that I can absolutely subscribe to. It’s one of the dangers with the internet that there’s an awful lot of noise out there, not only in terms of the detail of the legal position, but what people might think the legal position is.”

“If you miss one aspect, you’re absolutely sunk at that moment,” he adds.

So what does Alex think about the perception of ‘landlord versus tenant’ I ask?

“I don’t agree with that narrative at all, I think it’s a shame,” he replies.

“Landlords need tenants and without them they don’t have a business. Without landlords tenants don’t have accommodation to rent. So, everything should be as one, but there is this slight perception of ‘us versus them’, which is really unfortunate.”

I ask Alex if he thinks that people have become less tolerant.  If so, might it have something to do with lockdown?

“I think it’s really interesting,” he says. “Generally my perception is, and I say it in the professional context of our work, I think landlords and investors have been and continue to be remarkably patient.”

“An awful lot of people are at the moment in difficult circumstances,” Alex continues. “There’s real uncertainty out there surrounding the pandemic, and jobs, and incomes, and lockdowns, and we’ve got all of that baggage coming through.”

“I have experienced landlords who are basically sat on portfolios of properties with significant arrears at the moment.  However, they are not necessarily taking proactive steps other than speaking with a tenant, trying to encourage, say, payments by instalment or something, to reduce the impact.”

“They’re not necessarily pushing the ‘GO’ button on say, issuing claims or even notices. So I think there’s been an awful lot of flexibility carried by people, and in that sense there’s a lot of tolerance out there,” he suggests.

We’re all in agreement that litigation should only ever be the last card played after all other attempts at solving a problem have failed.  Therefore, I think it’s important for Alex to clarify three steps to make the process more straightforward and accessible.

“Firstly, particularly with a focus on property as we’ve discussed, I would absolutely make the process more straightforward for everybody,” Alex begins.

“Whatever that looks like, in terms of notices, all of this complexity, the lack of discretion, the fact that it’s so rigid and inflexible. I think all of that needs to go away and be altered,” he says.

“Absolutely the evictions claims process should be made more straightforward for landlords, and actually clearly for tenants too.”

“That might sound slightly perverse, but making eviction claims much more straightforward, quicker and simpler will aid people trying to deal with it themselves.”

“So although it may sound weird, I would try and make the eviction process quicker and easier, simpler.”

“Secondly, and I start getting a little bit technical in this answer, I’d absolutely be allowing cost recovery. This is because I just think at the moment you’ve got too much incentive to a defendant with a spurious defence that actually lacks any momentum or substance. And that’s just wrong,” he adds.

“It snares up the court process, drags this whole thing out. Really, I would be shifting this burden on having to ever even contemplate litigation or issue claims.”

“I’d include claims against the government, or whoever it might need to be, where legal aid is being used, but the case is then lost.”

“I find that really difficult to justify in trying to explain to a landlord at the very outset that if a case is lost, somebody somewhere should be paying for that,” Alex continues.

“When a landlord has incurred costs in getting to an outcome, if the tenant is funded by legal aid, the landlord cannot recover those costs. So it will not feel like a win,” he concludes.

“Lastly, the local authority has a statutory duty to re-house people who are being properly and correctly evicted.  This may be where, say, the property that they’re in is being sold…” Alex tells me.

“The truth of it is, it’s a complete waste of public money and resources for claims to be necessary in this area. It really isn’t necessarily in an awful lot of cases. So I’ve been encouraging local authorities to step in earlier,” he explains.

“I recognise how difficult that is for local authorities, it’s why I also add into making evictions easier, to try and encourage more inward investment by private individuals.”

“I think that is a massive part of the solution to the housing crisis here. We can’t be just relying on local authorities. So those are the three steps that I’d take.”

“As controversial as they might seem, it’s all geared around trying to help families and tenants,” he adds.

There’s only so much of Alex’s advice that I can fit into two blogs! My third blog in this series, focusing on the detailed area of compliance and section notices will follow.

In the meantime, if you would like to get in touch with Alex direct you can do so via his website https://helix-law.co.uk .  You can listen to our entire chat using the ‘listen again’ option by clicking here.